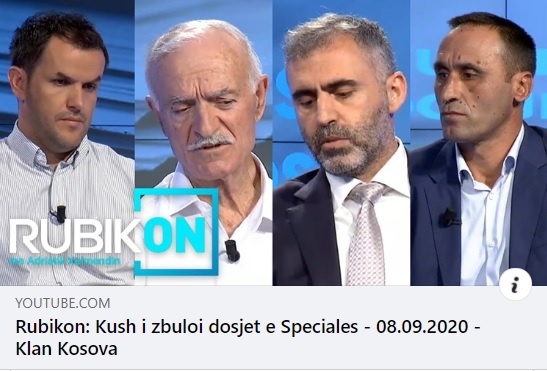 Members of the Roma, Ashkali and Egyptian communities are not fascinated. Magjup is a denigrating, derogatory and contemptuous term to offend members of these three communities.
Unfortunately we do not hear such offensive terms only on the streets but also in famous TV shows which have a national audience.
On September 8, guests on the show Rubicon to Mr. Adriatik Kelmendi were Mr. Kushtrim Koliqi, Executive Director of Integra, Mr. Besnik R. Berisha, Lawyer, z. Sokol Qazim Dobruna, former President of the KLA Court and Mr. Xhevdet Qeriqi, Chairman of the Council for the Protection of the Rights of KLA Veterans who discussed the discovered special files.
During the debate more precisely in the 56:18 minute Mr. Dobruna referred to the Roma, Ashkali and Egyptian communities with the term "magjup" and the misfortune was that no person present in the debate, not even the author of the show, Mr. Adriatik Kelmendi (already appointed director of TV Klan Kosova) did not react to improve Mr. Dobruna to show that the use of such a term is offensive to members of these three communities.
The promotion of the rights of communities and their members in the Republic of Kosovo is also guaranteed by LAW NO. 03 / L-047 pursuant to Chapter IV article 65 point 1 and article 81 point 1 paragraph 2 of the Constitution of the Republic of Kosovo. Therefore, we ask journalists and television representatives to be careful during their shows not to use denigrating terms for specific groups in order not to incite hate speech among the citizens of Kosovo.
Also the least that can be done in this regard besides apologizing to the Roma, Ashkali and Egyptian communities for using denigrating language against them, journalists can organize debates where anti-Gypsyism could be discussed, the manner of manifestation and the consequences of to members of communities.