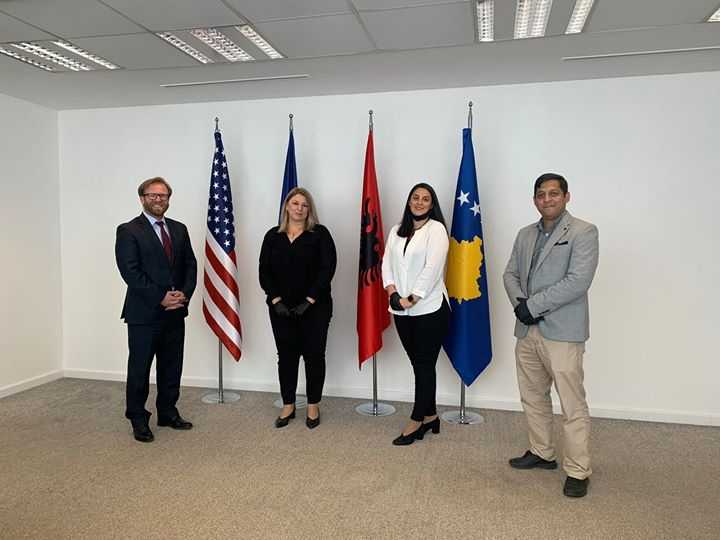 The civil society organizations that work together with the Roma, Ashkali and Egyptian communities have come together and unanimously agreed on the most important issues for improving the well-being of these three communities which they have decided to address to the new Government of Kosovo for them to taken into account during their governance as well as the drafting of national strategic documents in the next four years. With this aim, a series of meetings have been organized with representatives of public institutions. Among the first meetings, was held on December 21, 2019 in the office of the VETËVENDOSJE with the President Mr. Albin Kurti, together with Vice President Fatmire Mulhaxha Kollçaku and members of the Presidency Xhelal Sveçla and Sami Kurteshi.

The main issues that were discussed and required intervention were:

President Kurti expressed his appreciation for the work that civil society organizations are doing and informed their representatives about the priorities of the new government, where democratic state building, the rule of law, economic development and job creation will not exclude and discriminate people. At the same time, at the meeting it was promised that; "The new government will intervene where it is most needed, making it clear that everyone is aware of the situation in which the Roma, Ashkali and Egyptian communities are, who have a double burden because they continue to be discriminated against," he said, and promised that this phenomenon will change. The new government will direct its energy towards projects that directly affect and develop the lives of these communities and here we will include in particular the support of organizations and activities that protect and advance their interests.

On May 22, in the office of the Deputy Prime Minister Mr. Haki Abazi, was held a meeting with the Executive Director of the NGO VoRAE Mr. Isak Skenderi, Mrs. Vesa Batalli, and Mrs. Njomza Uka Selimi, in order to discuss the situation of the Roma, Ashkali and Egyptian communities with special emphasis on the issue of unemployment and Antigypism in our Republic. For 20 years, these communities have been neglected by the government, denying them guaranteed rights and freedoms, as well as access to employment, health, education, social protection and care.

Mr. Skenderi stressed that: “given the fact that the state of Kosovo guarantees a constitutional basis for all its citizens living and exploiting all the benefits offered in all segments of life for all its inhabitants, we as a civil society aim to advocate for the rights of the Roma, Ashkali and Egyptian communities, as well as to provide equal employment opportunities, specifically in public institutions, as provided by the applicable law Law no. 03 / L-149, Article 11.3." At the same time, the meeting it was discussed the importance of accepting Antigypism as a specific form of racism, an ideology based on racial superiority, a form of dehumanization and institutional racism fueled by historical discrimination, which is also expressed in violence, hate speech, exploitation, stigmatization and form of discrimination. Thus the Roma, Ashkali and Egyptians have historically faced discrimination and disadvantages in all spheres of life such as education, employment, standard of living, health and housing, thus contributing to their stigmatization and social exclusion.

Given the current situation of the Roma, Ashkali and Egyptian communities in Kosovo, recognizing Antigypism as a specific form of racism, addressing it in state policy and setting up a commission to take concrete steps to improve the current situation would show responsibility that Kosovo has towards minority communities. Also, taking a decision by the Kosovo Government which would be committed to respecting and fulfilling the employment quota by pledging that in the opening of new jobs in the future in public institutions priority will be given to the Roma, Ashkali and Egyptian, would show the will of the Government of the country to contribute to the employment and positioning of these three communities at a better level in our society.

Deputy Prime Minister Mr. Abazi expressed his appreciation for the work done by the organization and informed us that the priorities of the Government, from the beginning are the creation of a democratic country, the rule of law, economic development and the creation of jobs where it will not exclude and discriminate against communities living in Kosovo. Due to the situation created by the pre-government, with the new Government unfortunately the planning and promises were to help and create opportunities for change and to offer opportunities for advancing the interests of the Roma, Ashkali and Egyptian communities.

Furthermore, Mr. Abazi stressed that decisions that would contribute to improving this situation are necessary, but due to the current political situation in the country, such decisions will be reviewed as soon as possible.

At the end of the meeting, it was discussed about the continuation of cooperation on the most important issues for improving the well-being of these three communities where anti-Gypsyism, employment, education, education and housing lead.